Chinese Yuan on Pace for Worst Month Since 1994
0 Comments 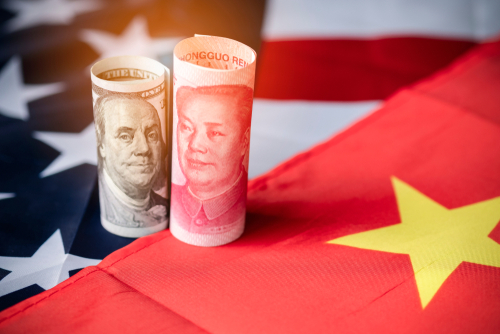 On Friday, the Chinese Yuan edged lower as it was on pace to set the worst month since the country’s currency reform in 1994. The yuan has been facing weakness due to the ongoing trade tensions between the U.S. and China as well as a global economic slowdown.

At the end of domestic trading, onshore spot Yuan finished at 7.1452 per dollar, 22 pips weaker than the previous session close of 7.1430, according to Reuters. The corporate demand for dollars remained heavy on Friday, which also dragged the yuan lower.

If the spot yuan finishes at the domestic closing price, it would have lost 3.7% to the dollar in the month of August.

The People’s Bank of China (PBOC) set the official yuan midpoint at 7.0879 per share on Friday, marking it the weakest level since March 2008. However, the midpoint level was much stronger than what the market had anticipated this week.

“An aggressive CNY depreciation is unlikely in the foreseeable future,” Zhou Hao, analyst at Commerzbank in Singapore, said in a note on Friday, according to Reuters.

“Instead, a gradual and managed depreciation remains the baseline in our opinion as this is in line with China’s overall strategy. Needless to say, the capital controls in mainland China still remain in place, which also means that the authorities will still be able to control the pace of the currency depreciation to a larger extent if they deem this necessary.” Hao added.

However, industry experts noted that if there are no additional tariffs in the future, the yuan is likely to consolidate at its current levels. Nonetheless, the additional tariffs that were expected to be implemented in September are now delayed until December.

The U.S. and China have noted this week that they want to move towards settling trade tensions in a calm matter, which could also strengthen the yuan if the two parties meet negotiations.